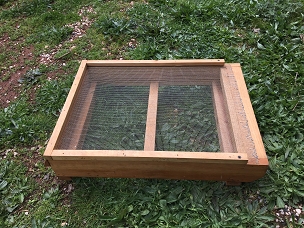 Z-Boards Weatherproofed with White Observation Board
$23.00
(0)

It started with a phone call from a NASA scientist.

Haynes Haselmaier called me last summer to tell me about his new invention to keep Small Hive Beetles out of bee hives. I explained, in California, this pest has not been a problem. A few crop up every year after Almonds when beekeepers all over the states bring their hives here for pollination, but they do not seem to over winter. Maybe it's the soil, or our dry climate.
Haynes told me it doesn't matter because he was really interested in our Screened Bottom Boards and Oil Tray Traps that we sell. His invention needs a good screened bottom board and tray to be really effective.
Haynes came from a long line of beekeepers. When he lost his 6 hives in Mississippi to a bad Small Hive Beetle infestation, he was determined to find a solution.   He realized that the beetles, once they fly into the hive, were not able to fly up or hop up into the comb. The pest would scurry to the side of the hive and run up the walls to get into the comb.
Haynes also realized that the SHB could not climb over a barrier and started to experiment with strips of metal bent at angles that would go around the inside of the hive.
These experiments were so successful at keeping Small Hive Beetles out of the comb that when Haynes went to take pictures, he couldn't find any beetles to experiment with.  The inventor had to ask a beekeeping club in neighboring Louisiana to gather Small Hive Beetles for him to use in his hive, promising to return them when he was finished (grin).
The results were amazing. Haynes released 50 Small Hive Beetles into a closed empty hive, set up with a camera, on a solid bottom board and baited with frames of comb honey. After 3 days, all the beetles were huddled in the corners and along the edges of the hive, under the Beetle Baffle. There were none in the comb. The beetles were unable to scale the walls of the hive.

Now days, beekeepers are using Diatamous Earth  in their trays or put a layer on their observation boards.  Its a lot less messy and very effective in killing Small Hive Beetles and any Varroa that falls through.

The Mounted Beetle Baffle, our Combo Deep Screened Bottom Board, Diatamacous Earth (on observation board or in our Metal Small Beetle oil tray) and Baitable Beetle Jail work together to rid your hive of this serious pest.

You can install the 'Beetle Baffle' yourself on your Screened Bottom Boards with a staple gun.  Once piece needs to be installed on your hive body.  Or you can make spacers.

We also have the Mounted 'Beetle Baffle installed on removable weatherproofed spacers that are easy to place on your Screened Bottom Boards with no tools.
TOP